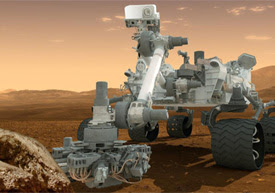 Astronomers could use observations from ‘Curiosity’ when Mars’s moon Phobos crosses in front of the Sun, as happened in September, to understand exactly where the rover is on the red planet.
Researchers at the Complutense University of Madrid (Spain) have developed a method for achieving this precisely.
The exact location of Curiosity on the surface of Mars is determined using data transmitted from its antennas as well as the space probes that orbit the red planet. It is very unlikely that these systems would fail but in such an eventuality there would be an alternative for determining the location of the rover: ‘ask it’ what eclipses it sees.

“Observing these events offers an independent method for determining the coordinates of Curiosity,” explained Gonzalo Barderas, researcher at the Complutense University of Madrid (UCM) and coauthor of the study.
For this method to be used the robot must have a camera or sensor capable of sending data about an eclipse.
“It could prove especially useful when there is no direct communication with Earth that allows for estimation of its position using radiometric dating or images provided by orbiters,” noted the researcher.

The initial objective of the UCM group was to create a mathematical tool for predicting Phobos eclipses from the surface of Mars. But their method also proved useful in locating the precise positions of any spacecraft that are also capable of observing eclipses from there.

The model predicted partial eclipses that took place on 13 and 17 September. The MastCam camera that Curiosity carries in its mast captured them without any problems. The Spanish REMS instrument, namely the vehicle’s environmental station, also detected a reduction in ultraviolet solar radiation during the eclipses.

The initial simulations and the real end images coincided with a precision of one second. In order to make their calculations, the scientists considered the initial predicted landing area for Curiosity: an ellipse of 7 x 20 km^2. In addition, with just two minutes of observations and using the start and end times of Phobos’ contact with the Sun, error can be reduced in the rover coordinates from an order of magnitude of kilometers to another of meters.

According to the model, the next crossings of the Martian moon will take place between 13 and 20 August 2013 and between 3 and 8 August 2014. Curiosity will have the chance to observe eclipses again and the Spanish scientists will be able to confirm the validity of their tool.

“In any case, this method can be applied to other space probes operating on the surface of Mars that have the ability to make optical observations or that have instruments that measure solar radiation,” Luis Vázquez, one of the authors, stated.

In fact, under the scientific management of Vazquez, this study forms part of a Spanish project associated to the joint Russian, Spanish and Finnish MetNet mission to distribute small meteorological stations across Mars.

The project is called the Mars Environmental Instrumentation for Ground and Atmosphere (MEIGA). Its aim is to place different sensors on the red planet, including those involving solar radiation that can detect eclipses.
Labels: News
Newer Post Older Post Home