Geminid meteor shower to light up the sky on Dec 13, 14 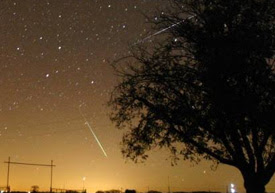 Under a clear, dark sky, you may see a shooting star every minute from 10 p.m. local time Thursday until dawn Friday morning, they said.
According to them, lower counts of Geminid meteors should be visible earlier that evening, and a few should also flash into view on the nights of December 11, 12, and 14.

“The Geminids are usually one of the two best meteor showers of the year. They may beat out the Perseids of August,” said Alan MacRobert, senior editor of Sky and Telescope magazine.

And you need no equipment other than your eyes to watch for meteors.

“Go out late in the evening, lie back, and gaze up into the stars. Relax, be patient, and let your eyes adapt to the dark. The best direction to watch is wherever your sky is darkest, probably straight up,” said Sky and Telescope editor in chief Robert Naeye.

Geminids can appear anywhere in the sky. Small ones appear as tiny, quick streaks. Occasional brighter ones may sail across the heavens for several seconds and leave a brief train of glowing smoke.

The Geminid meteors are created by tiny bits of rocky debris (the size of sand grains to peas) shed from a small asteroid named 3200 Phaethon. Over the centuries these bits have spread all along the asteroid’s orbit to form a sparse, moving “river of rubble” hundreds of millions of miles long. Earth’s annual orbit around the Sun carries us through this stream of particles every mid-December.

The particles are travelling 22 miles per second (79,000 mph) with respect to Earth at the place in space where we encounter them. So when one of them strikes Earth’s upper atmosphere (about 50 to 80 miles up), air friction vaporizes it in a quick, white-hot streak.
Labels: News
Newer Post Older Post Home