The Large Hadron Collider is to be switched off at the end of the year to undergo a major upgrade, but scientists hope to have achieved one of the machine's major goals by the time it does – proving the existence of the so called God Particle. 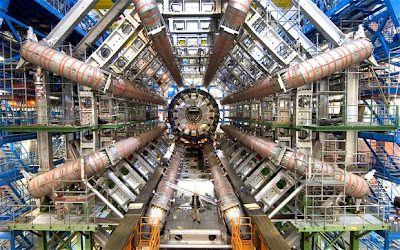 Dr Rolf-Dieter Heuer said: 'If the Large Hadron Collider continues to work I know we have enough collisions to produce enough signals to identify the Higgs Boson'

Rolf-Dieter Heuer, director of CERN where the LHC is based, said he was confident that by the end of the year it will be possible to say whether the Higgs Boson, the particle which is responsible for giving mass to the universe, exists.

The theoretical particle, nicknamed the God Particle due to its central role it has in explaining modern physics, has never been detected and scientists have been working for decades to prove its existence.

Scientists hope that high energy collisions of particles in the 17 mile underground tunnel at CERN will finally allow them to create the conditions to allow them to spot the elusive Higgs Boson.

Dr Heuer, who was speaking at the Hay Festival, said the LHC is scheduled to be closed down at the end of this year for up to two years in order to carry out upgrades that will increase its power and allow it to continue with more experiments.

For the first time the LHC will also be opened to the public, who will be allowed to walk through the underground tunnel that straddles the French-Swiss border.

Once the existence of Higgs Boson is known, there will be further work to prove its properties and understand the origins of the universe.

Dr Heuer said: "If the Large Hadron Collider continues to work I know we have enough collisions to produce enough signals to identify the Higgs Boson.

“We will know by the end of this year whether it exists or whether it is non-existent. This would be a huge discovery that after 50 years we are able to describe the visible universe.

"We will have taken a big step forward about our knowledge of the physical world. It will help us to understand the creation of the universe."

CERN require a high level of proof and will only announce that the Higgs Boson exists when there is just a one in three million chance they are wrong.

Dr Heuer said the discovery of the Higgs Boson will also help investigations into this wider universe. The visible universe only makes up 5 per cent and the rest is 'dark energy' and 'dark matter'.

He said it was impossible to imagine at this stage how the knowledge of the particle could be applied to practical applications but pointed to previous discoveries have led to developments in medicine and the internet.

“Whatever basic science resolves, at some stage it is of use to society. The problem is we do not know when or where.”

The search for the God Particle has proved controversial. Critics feared the Large Hadron Collider could create a massive black hole that would "swallow the Earth".

Religious groups have also questioned the search for a particle at the origins of the universe.

Dr Heuer admitted that "micro black holes" may be created in the Large Hadron Collider but he insisted this was safe as they would decay almost immediately and it could even be good for science as it shows that micro black holes are occurring all the time.

He has had meetings with the Pope and insisted that the interface where science ends and religion or philosophy begins is changing all the time.
Labels: News
Newer Post Older Post Home