Sandy Dahl, the widow of the pilot of 9/11 Flight 93, dies unexpectedly.

The widow of the pilot of Flight 93, which crashed into a field on 9/11 after he helped fight off hijackers, has died unexpectedly. 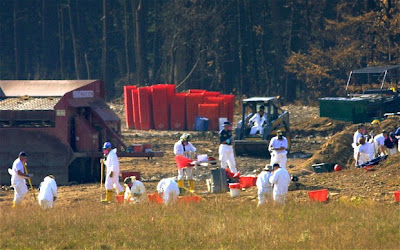 Workers sort through debris at the crash site of flight 93

Sandy Dahl, 52, became one of the faces of the grieving 9/11 families, founding a scholarship in the name of her husband, Jason, and giving public speeches to ensure the memories of those lost were not forgotten.

Officials at the Captain Jason M Dahl Scholarship Fund said she died in her sleep from natural causes at her home near Denver, Colorado, on Friday night.

Captain Dahl became a hero after he and passengers on United Flight 93 fought back against hijackers who seized the plane. It came down in rural Pennsylvania with the loss of all 40 on board but no casualties on the ground. It is thought the terrorists had been planning to fly into the White House.

Last year, Mrs Dahl said of her husband and the Flight 93 passengers: "They did what would almost never be asked of anyone. It's an unusually wonderful thing they did, their self-sacrifice."

Family friend,Tom Bush, who serves on the scholarship board, which raises money to fund young people who want to train as pilots, said: "She was a brave woman, I think a soldier herself in many ways, standing up for this country just like her husband did."