Treasure hunters have swarmed into the Sierra Nevada foothills in search of fragments of a minivan-sized meteorite which exploded above California. 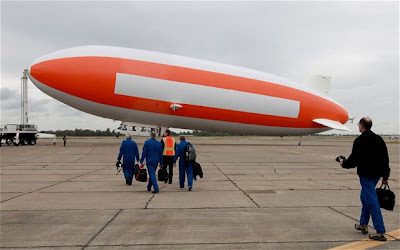 Nasa researchers walk to the zeppelin, Eureka, at McClellan Air Park in Sacramento, Calif., that will be used to search for pieces of a meteorite

A group of scientists have also taken to the skies in a blimp in search of parts of the meteorite that rained over the gold country last month.

The April 22 explosion was witnessed over a large swath of Northern California, USA, and Nevada.

Most of the recovered space rocks have been tiny, with the largest weighing in at 19 grams, or the weight of one AA battery.

Researchers from NASA and the non-profit SETI Institute in Mountain View, California, were on the lookout for larger fragments. After a brief weather delay, they took off from a Sacramento airfield aboard a blimp outfitted with sensors and cameras.

From the air, scientists scoured the terrain for places where sizeable meteorites might have scattered. The survey took them over the area where James W. Marshall first discovered gold in California in 1848. Once they pinpoint possible impact sites, they plan to follow up with a search party.

"Only small pieces have been found. There has to be big pieces out there," SETI Institute meteor astronomer Peter Jenniskens said before the trip. "We're just hoping to collect more meteorites for research."

Days after the approximately 154,300-pound (70,000-kilogram) meteor plunged through Earth's atmosphere with a loud sonic boom that was heard from Sacramento to Las Vegas, Jenniskens organised a team and found a 4-gram (0.14-ounce) meteorite in the parking lot of a park.

NASA estimated the meteor released energy equal to one-third the explosive power of the atom bomb dropped on Hiroshima during World War II. An event this size occurs once a year usually over unpopulated areas.

Initial inspection of rock fragments indicates this type of meteorite is among the oldest, dating to the solar system's birth 4 billion to 5 billion years ago.
Labels: News
Newer Post Older Post Home