Barack Obama is under pressure to publicly extend US protection to blind Chinese dissident Chen Guangcheng who took refuge in America’s embassy in Beijing, as White House aides stressed they would need to “balance” human rights and relations with China. 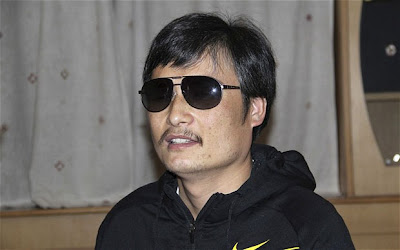 Mitt Romney, the presumptive Republican presidential nominee, demanded that US officials “take every measure” to ensure that Chen Guangcheng and his family were “protected from further persecution” despite the potential for the situation to descend into a diplomatic crisis.

Mr Chen, a 40-year-old lawyer and civil rights activist, made a remarkable escape last Sunday night from the home where he had been held under house arrest for the previous 20 months.

His alleged presence at the US embassy has heightened tensions between Washington and Beijing ahead of talks due to start in the Chinese capital this Thursday between the country’s leadership and Hillary Clinton, the US secretary of state, and Timothy Geithner, the treasury secretary.

Kurt Campbell, one of Mrs Clinton’s assistant secretaries of state, arrived in the Chinese capital earlier than planned yesterday, as officials engaged in tense negotiations about Mr Chen’s fate.

Mr Romney has sought to bolster his thin foreign policy credentials with an aggressive approach to China, which he has labelled a “currency manipulator”, and is dismissive of the Obama team’s pursuit of a “strategic and economic dialogue” between the world powers.

He said in a statement that any “serious” policy on China must confront Beijing’s “denial of political liberties, its one-child policy, and other violations of human rights,” adding: “Our country must play a strong role in urging reform in China and supporting those fighting for the freedoms we enjoy.”

Mr Romney has been put under further pressure to strengthen his claim to be a potential commander-in-chief by the Obama campaign, which has used the impending anniversary of the assassination of Osama bin Laden to suggest that the former Massachusetts governor would not have ordered the raid that killed the al-Qaeda chief.

However John Brennan, Mr Obama’s counterterrorism adviser, stressed that the US relationship with China was “very important” and officials would have to make sure that the “appropriate balance is struck”, prompting Republican concerns that he was mulling concessions.

“The president tries to balance our commitment to human rights, making sure that the people throughout the world have the ability to express themselves freely and openly, but also that we can continue to carry out our relationships with key countries overseas,” Mr Brennan told Fox News.

Declining to confirm Mr Chen was indeed at the embassy in Beijing or any other details surrounding the case, Mr Brennan said he was confident the president and his diplomats “will be able to find the right way forward”.

The case forces Mr Obama to walk a diplomatic and political tightrope. Appearing to cave under pressure from China to hand Mr Chen into their custody would be especially unpalatable so close to a presidential election and Mrs Clinton has in any case repeatedly called for his release.

It is understood that Mr Chen is not seeking asylum in the US, and fellow dissident Hu Jia told The Sunday Telegraph that his friend wanted to remain in China to continue his fight against human rights abuses. However, staying no longer seemed feasible, said Mr Hu.

In a video posted online after his escape, Mr Chen called on Premier Wen Jiabao to prosecute local officials who have subjected him and his family to repeated beatings during his time under house arrest, for his family to be protected, and for Premier Wen to act to end official corruption in China.

“I think Chen would prefer to stay in China, but only if the Chinese government agree to the demands he made in the video he released on Friday,” said Nicholas Bequelin, the senior Asia researcher at the Hong Kong office of Human Rights Watch.

“I don’t think it is possible to convince him to agree to any deal proposed by the authorities. And he won’t want to stay in China if it means returning to house arrest and being held in permanent limbo. In China, house arrest can go on for a lifetime.”

A possible compromise could see Washington request that Mr Chen, who has been blind since early childhood and who is believed to have injured himself in his escape, be allowed to travel to America for medical treatment.

Any deal is also likely to include Mr Chen’s wife, daughter, and mother, who remain in their home in the village of Dongshigu in eastern Shandong Province. The house is now surrounded by local authorities and it is impossible to contact them.

More uncertain is the future fate of Mr Hu and the other activists who aided Mr Chen in his escape. All have been detained, along with Mr Chen’s brother and nephew.
Labels: News
Newer Post Older Post Home