The world’s 4th largest lake has dried up to less than 10% its size and is now a giant desert, dotted with shipwrecks 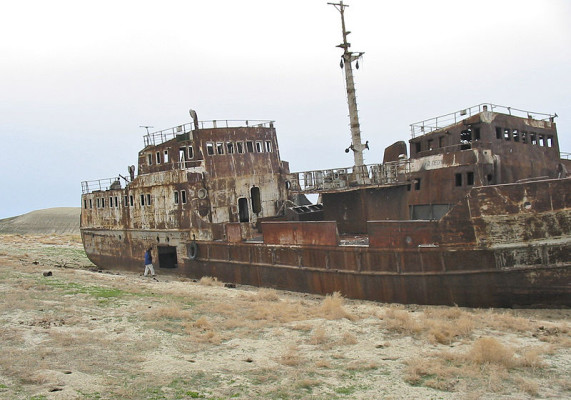 Formerly one of the four largest lakes in the world with an area of 68,000 km2 (26,300 sq mi), the Aral Sea has been steadily shrinking since the 1960s after the rivers that fed it were diverted by Soviet irrigation projects. By 2007, it had declined to 10% of its original size.

The Aral Sea formed about 5.5 million years ago due to a fall in sea level and the uplift of the Elburz and Caucasus Mountains. The shrinking of the Aral Sea has been called “one of the planet’s worst environmental disasters”. The region’s once-prosperous fishing industry has been essentially destroyed, bringing unemployment and economic hardship. The Aral Sea region is also heavily polluted, with consequential serious public health problems.

In the early 1960s, the Soviet government decided the two rivers that fed the Aral Sea, the Amu Darya in the south and the Syr Daryain the east, would be diverted to irrigate the desert, in an attempt to grow rice, melons, cereals, and cotton.

This was part of the Soviet plan for cotton, or “white gold”, to become a major export. This temporarily succeeded, and in 1988, Uzbekistan was the world’s largest exporter of cotton.

The construction of irrigation canals began on a large scale in the 1940s. Many of the canals were poorly built, allowing water to leak or evaporate. From the Qaraqum Canal, the largest in Central Asia, perhaps 30 to 75% of the water went to waste. Today, only 12% of Uzbekistan’s irrigation canal length is waterproofed. 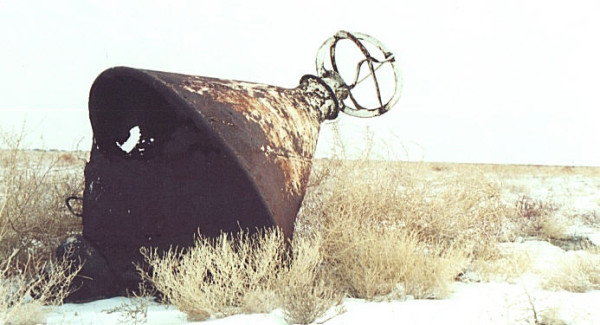 Of the 47,750 km of interfarm irrigation channels in the basin, only 28% have antifiltration linings. Only 77% of farm intakes have flow gauges, and of the 268,500 km of onfarm channels, only 21% have anti-filtration linings, which retain on average 15% more water than unlined channels. 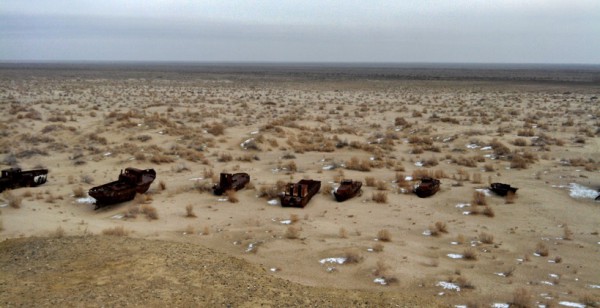 The disappearance of the lake was no surprise to the Soviets; they expected it to happen long before. As early as 1964, Aleksandr Asarin at the Hydroproject Institute pointed out that the lake was doomed, explaining, “It was part of the five-year plans, approved by the council of ministers and the Politburo. Nobody on a lower level would dare to say a word contradicting those plans, even if it was the fate of the Aral Sea.” 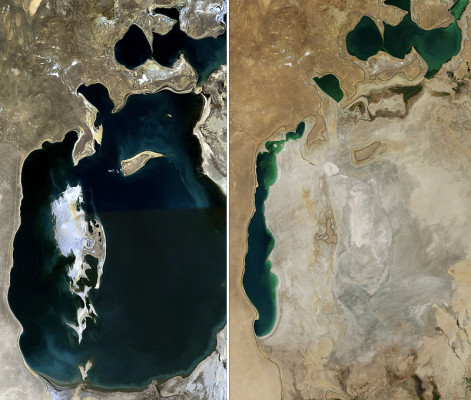 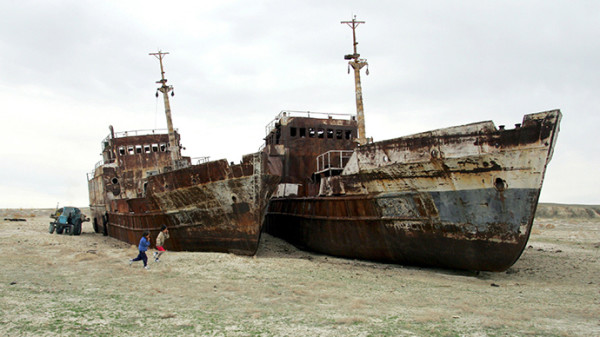 The reaction to the predictions varied. Some Soviet experts apparently considered the Aral to be “nature’s error”, and a Soviet engineer said in 1968, “it is obvious to everyone that the evaporation of the Aral Sea is inevitable.” On the other hand, starting in the 1960s, alarge-scale project was proposed to redirect part of the flow of the rivers of the Ob basin to Central Asia over a gigantic canal system. Refilling of the Aral Sea was considered as one of the project’s main goals. However, due to its staggering costs and the negative public opinion in Russia proper, the federal authorities abandoned the project by 1986.

In 1991, Uzbekistan gained independence from the Soviet Union. Craig Murray, a UK ambassador to Uzbekistan in 2002, described the independence as a way for Islam Karimov to consolidate his power rather than a move away from a Soviet-style economy and its philosophy of exploitation of the land. Murray attributes the shrinkage of the Aral Sea in the 1990s to Karimov’s cotton policy. 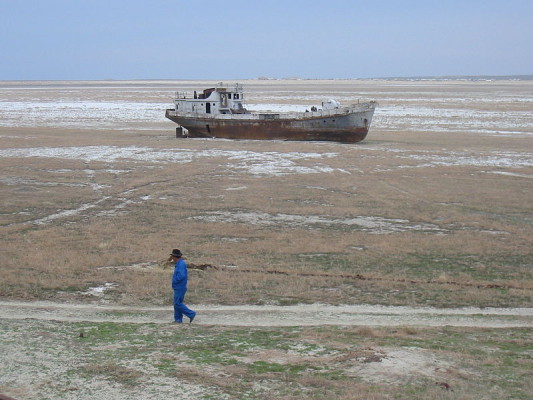 The government maintained a massive irrigation system which Murray described as massively wasteful, with most of the water being lost through evaporation before reaching the cotton. Crop rotation was not used, and the depleted soil and monoculture required massive quantities of pesticides and fertilizer. The run off from the fields washed these chemicals into the shrinking sea, creating severe pollution and health problems. Murray compared the system to the slavery system in the pre-Civil War United States; forced labor was used, and profits were siphoned off by the powerful and well-connected. Murray contrasts this to Kazakhstan, where the cotton industry had been privatized. 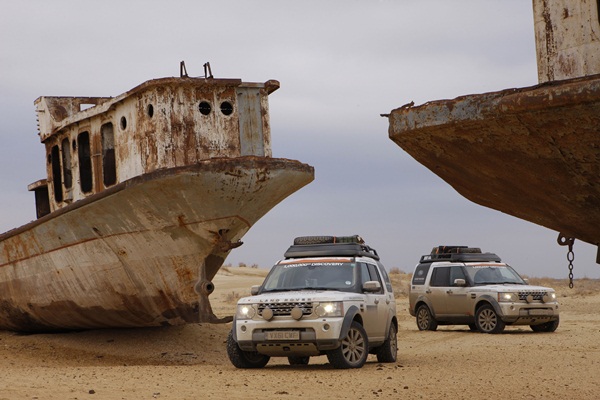 By summer 2003, the South Aral Sea was vanishing faster than predicted. In the deepest parts of the sea, the bottom waters were saltier than the top, and not mixing. Thus, only the top of the sea was heated in the summer, and it evaporated faster than would otherwise be expected. In 2003, the South Aral further divided into eastern and western basins.
In 2004, the Aral Sea’s surface area was only 17,160 km2 (6,630 sq mi), 25% of its original size, and a nearly five-fold increase in salinity had killed most of its natural flora and fauna. By 2007, the sea’s area had further shrunk to 10% of its original size, and the salinity of the remains of the South Aral had increased to levels in excess of 100 g/l. (By comparison, the salinity of ordinary seawater is typically around 35 g/l; the Dead Sea’s salinity varies between 300 and 350 g/l.) The decline of the North Aral has now been partially reversed following construction of a dam (see below), but the remnants of the South Aral continue to disappear and its drastic shrinkage has created the Aralkum, a desert on the former lake bed.
Newer Post Older Post Home