Truk Lagoon was considered the most formidable of all Japanese strongholds in the Pacific. On the various islands, the Japanese Civil Engineering Department and Naval Construction Department had built roads, trenches, bunkers and caves. Five airstrips, seaplane bases, a torpedo boat station, submarine repair shops, a communications center and a radar station were constructed during the war. Protecting these various facilities were coastal defense guns and mortar emplacements. The Japanese garrison consisted of 27,856 IJNmen, under the command of Vice Admiral Masami Kobayashi, then Vice Admiral Chuichi Hara, and 16,737 IJA men, under the command of Major General Kanenobu Ishuin. Due to its heavy fortifications, both natural and manmade, the base at Truk was known to Allied forces as “the Gibraltar of the Pacific”.

A significant portion of the Japanese fleet was based at Truk, with its administrative center on Tonoas (south of Weno). At anchor in the lagoon, were the Imperial Japanese Navy’s battleships, aircraft carriers, cruisers, destroyers, tankers, cargo ships, tugboats, gunboats,minesweepers, landing craft, and submarines. Some have described Truk as Japan’s equivalent of the Americans’ Pearl Harbor. 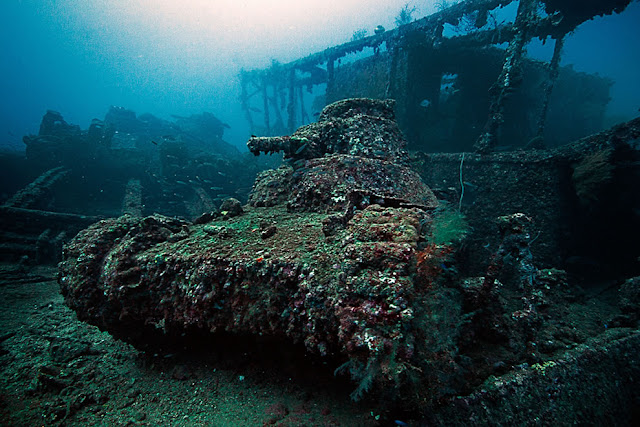 Diver gh0stdot captured amazing underwater images in the ghostly wreckage. This is a light tank on the deck of the San Francisco Maru at about 50m depth in Truk Lagoon. 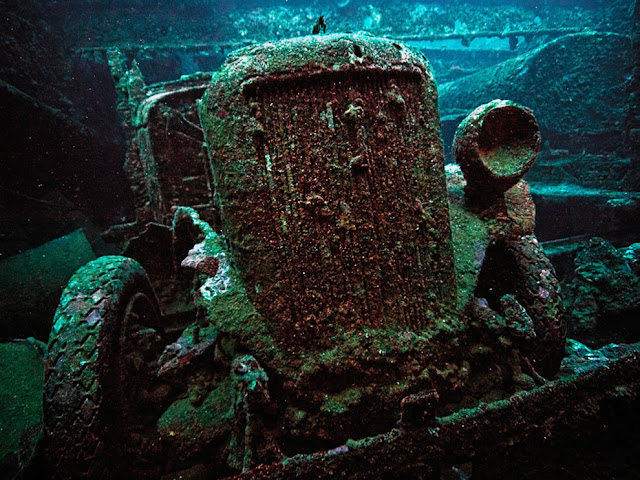 A truck in a hold of the San Francisco Maru at 50m depth in Truk Lagoon. We think the ghostly remains are eerily cool, yet creepy, but the photographer gh0stdot noted, “It was a tad dark in there, though, so it is hellish grainy. I do not usually take photos so deep, so I am pleased to have got anything at all in my fuzzy mental state. Nitrogen narcosis is quite strong breathing air at that depth.” 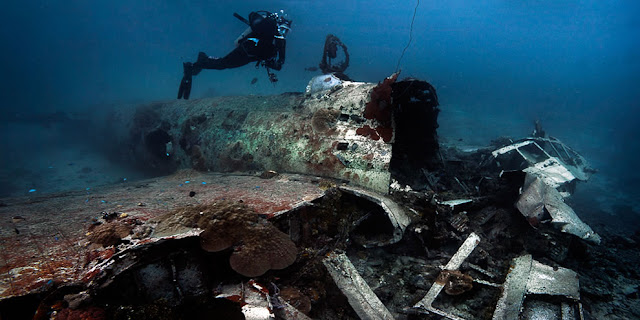 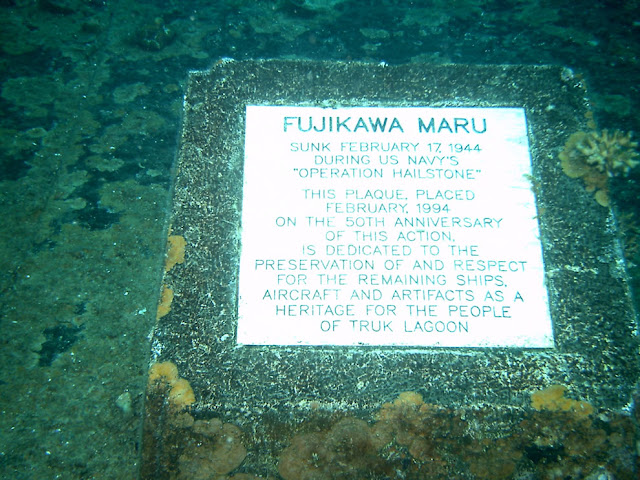 Commemorative plaque on the deck of the Fujikawa Maru. 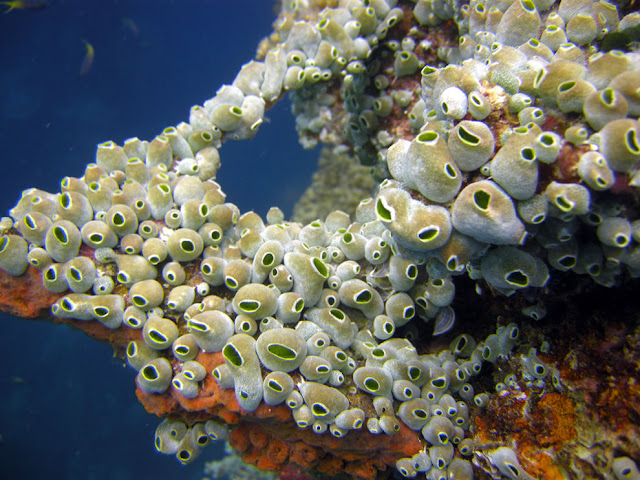 Matt Kieffe captured this shot of corals on the mast of the Sankisan Maru. Besides the massive graveyard of WWII shipwrecks, Truk Lagoon offers divers a kaleidoscope of colors and shapes of hard and soft corals. There are also diverse and eye-catching marine life in the shark-infested waters. 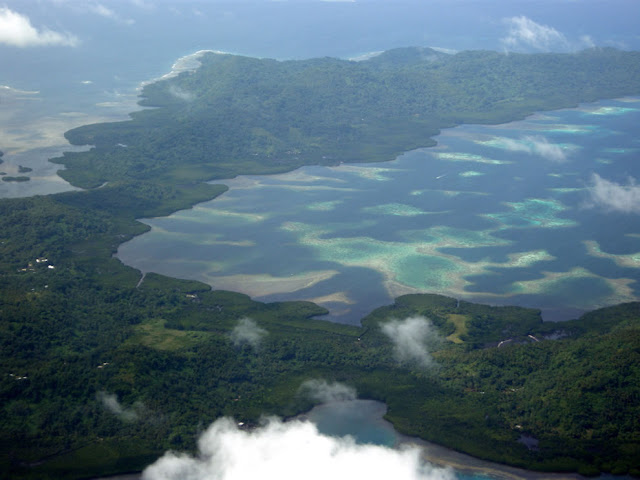 Let’s back up and show you where you are with an aerial shot taken while flying over Chuuk in south western part of the Pacific Ocean. Chuuk is the new name for an island group which formerly were known separately as Truk, Ruk, Hogoleu, Torres, Ugulat, and Lugulus. Chuuk is part of the Federated States of Micronesia. 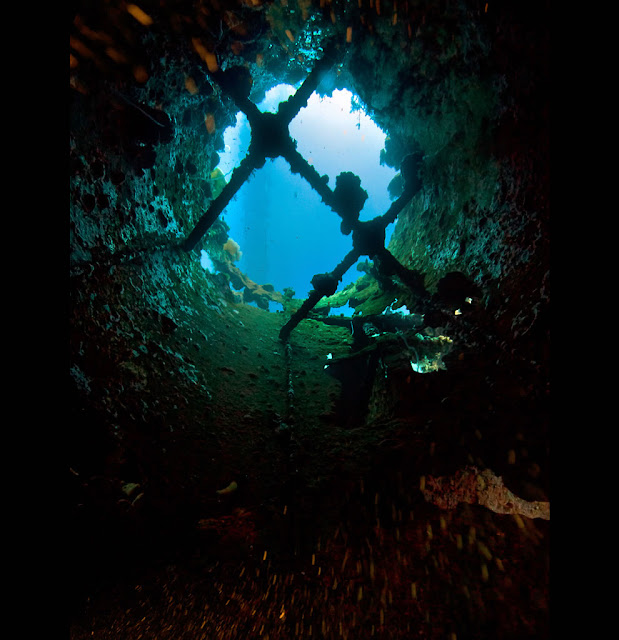 “Heaven peeps through the blanket of the dark.” Swimming up the funnel of the Unkai Maru. 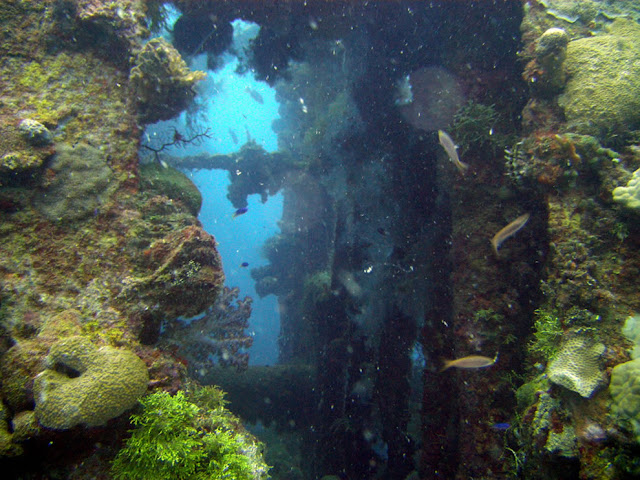 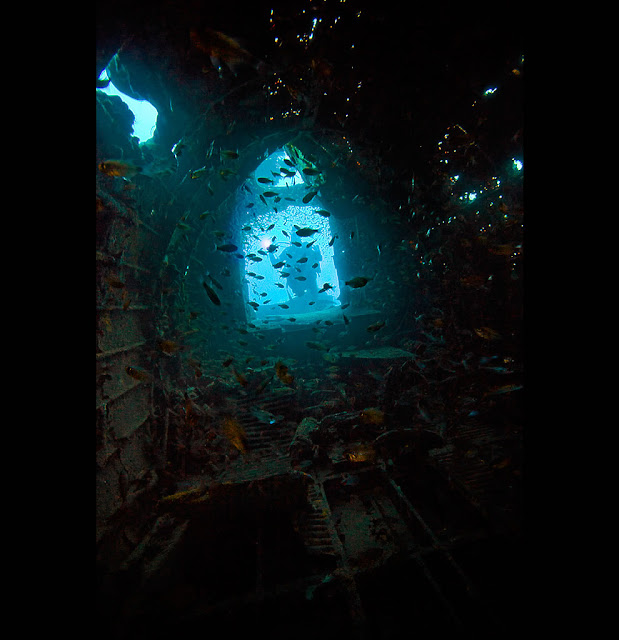 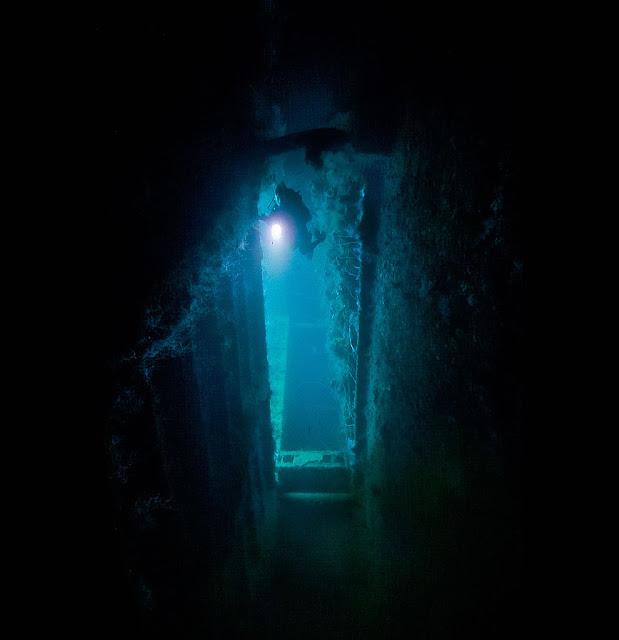 In 1944, Truk was devastated in one of the important naval attacks of the war. Forewarned by intelligence a week before the US raid, the Japanese had withdrawn their larger warships (heavy cruisers and larger vessels) to Palau. Once the American forces captured the Marshall Islands, they used them as a base from which to launch an early morning attack on February 17, 1944 against Truk Lagoon.

Operation Hailstone lasted for three days, as American carrier-based planes sank twelve smaller Japanese warships (light cruisers, destroyers, and auxiliaries) and thirty-two merchant ships, while destroying 275 aircraft, mainly on the ground. The consequences of the attack made “Truk lagoon the biggest graveyard of ships in the world” 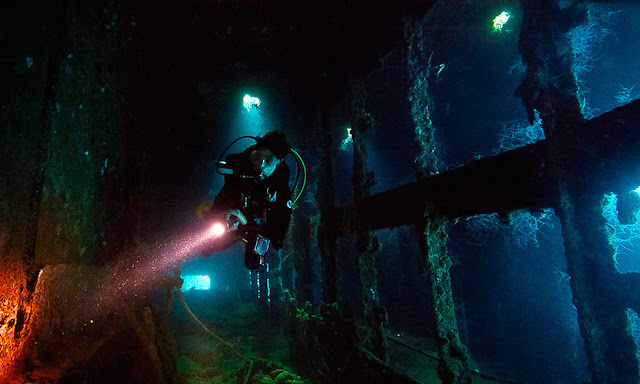 This is inside the Yamigiri Maru – maximum depth 32m. These amazing views are something most people will never see in real life. 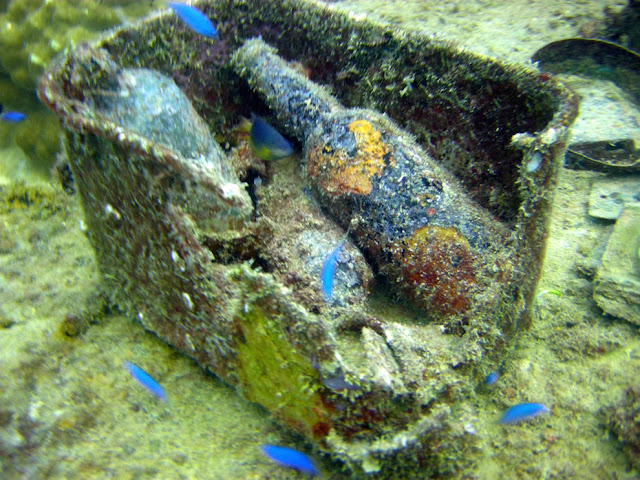 Photographer Matt Kieffer noted that this was from the “Kiyuzumi Maru – resting almost evenly on her port side about 600 yards from Fefan Island.” Fefan Island is the third largest inhabited island within the Truk Lagoon in the Federated States of Micronesia. 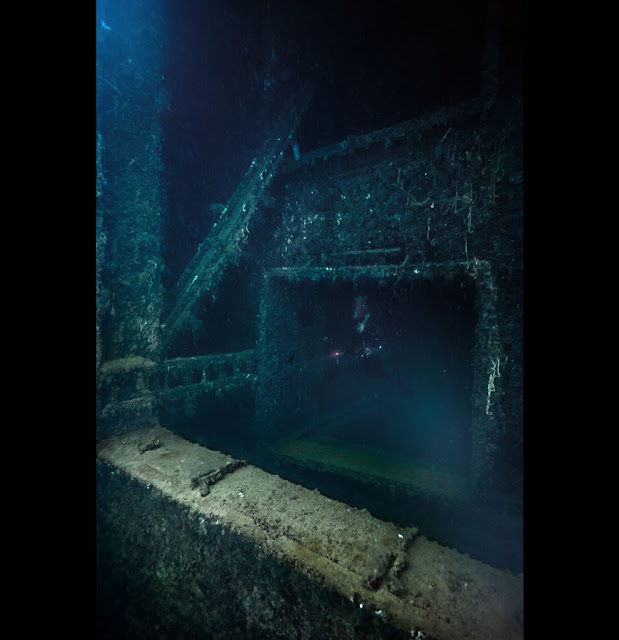 Leaving a hold of the Yamagiri Maru. The wreck lies on its side. 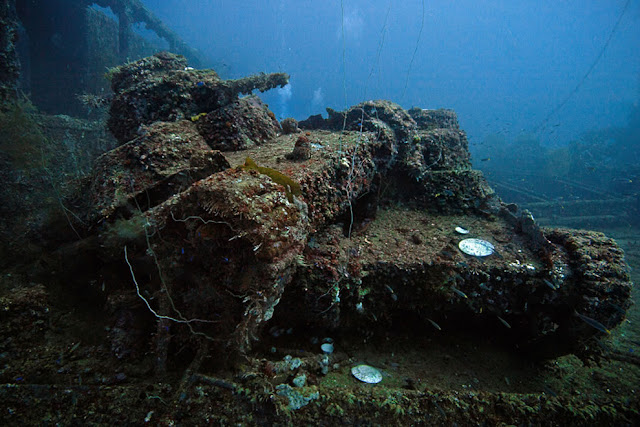 Light tanks on the deck of the San Francisco Maru at a depth of about 46m. With these amazing photos, it’s not hard to see why this area is known as the best shipwreck diving destination in the world.

gh0stdot captured this panorama of the Kawanishi Emily flying boat. 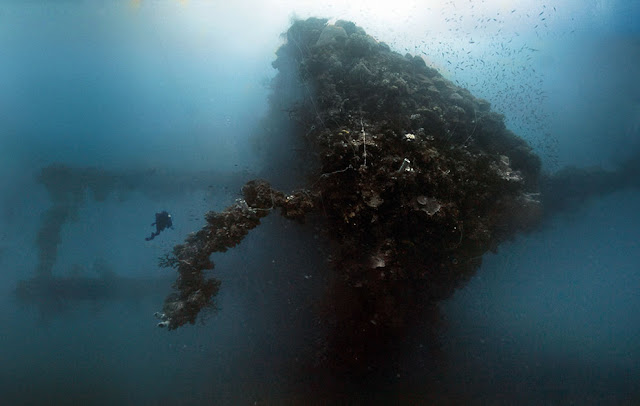 Now we’ll go dive into the shark-infested waters and go wreck diving, courtesy of gh0stdot. This is a panorama of the Yamagiri Maru. Truk Lagoon, Micronesia. The diver appears tiny next to the shipwreck. 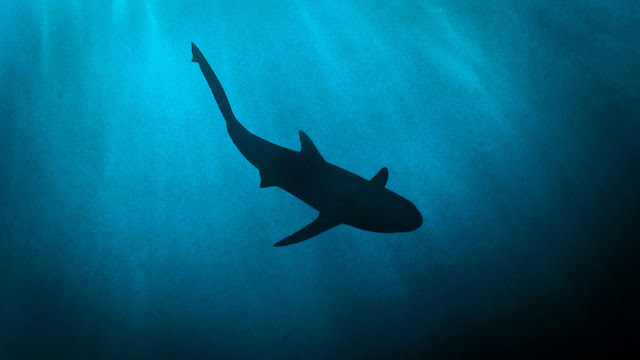 Watch out for rusted wrecked metal and wicked fins while scuba diving and exploring the Ghost Fleet of Truk Lagoon. 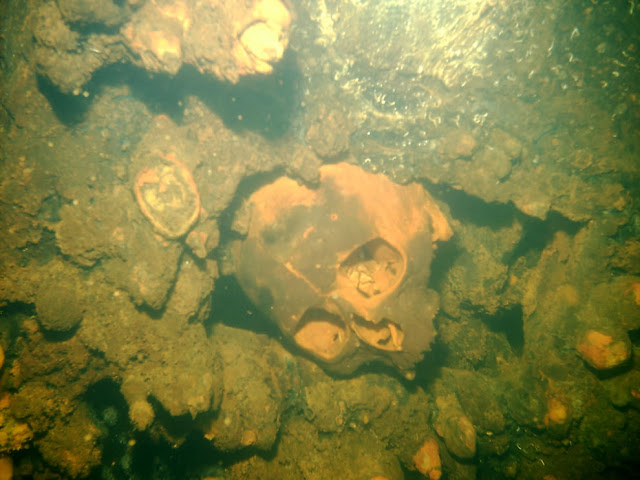 Skull of a Japanese sailor inside one of the wrecks of Truk Lagoon from Fujikawa Maru. Josh Gates of Destination Truth took his recorded underwater ghostly noisesto Jay and Grant of Ghost Hunters . . . adding weight for some to the claim that the Ghost Fleet of Truk Lagoon is haunted. 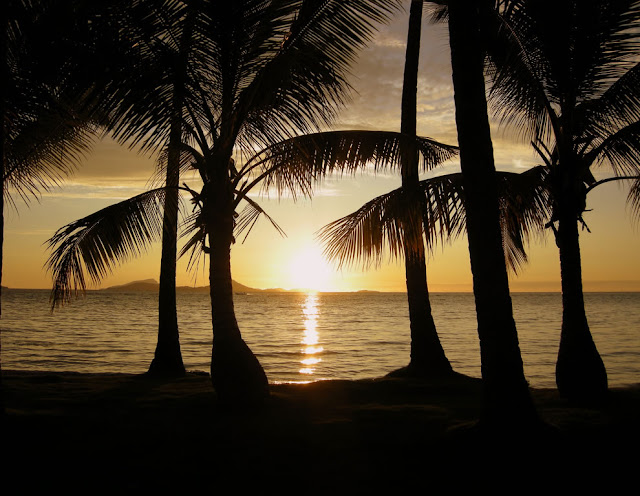 Sunset on Chuuk. We hoped you enjoyed this surreal virtual wreck diving adventure at Truk Lagoon, Micronesia. A special thank you to the amazing photographers who allowed us to show off their photos.


The attacks for the most part ended Truk as a major threat to Allied operations in the central Pacific. The Japanese garrison on Eniwetok was denied any realistic hope of reinforcement and support during the invasion that began on February 18, 1944, greatly assisting U.S. forces in their conquest of that island.

Truk was isolated by Allied (primarily U.S.) forces, as they continued their advance towards Japan, by invading other Pacific islands, such as Guam, Saipan, Palau, and Iwo Jima. Cut off, the Japanese forces on Truk and other central Pacific islands ran low on food and faced starvation before Japan surrendered in August 1945. 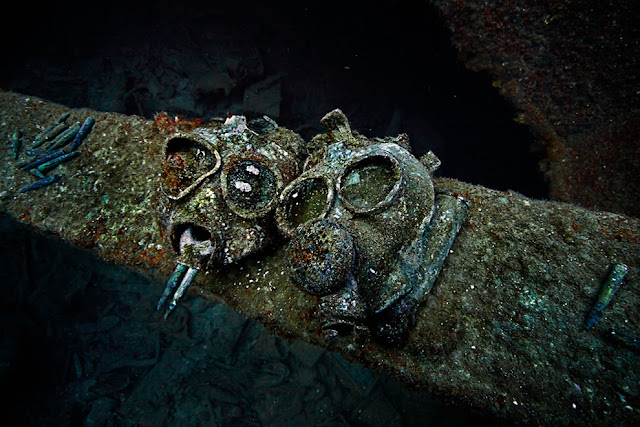 gh0stdot wrote, “Suspiciously placed gasmasks in the hold of the Nippo Maru at about 40m.” 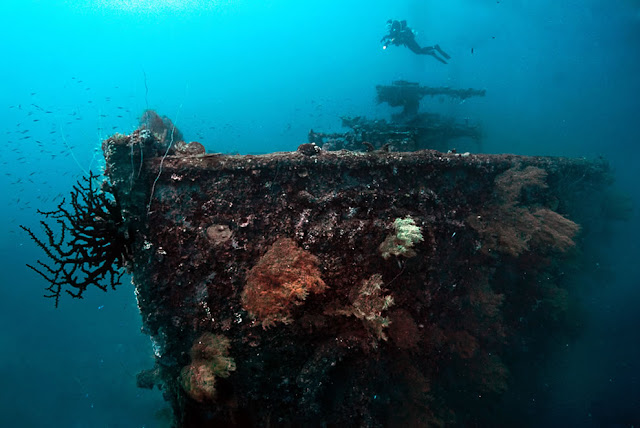 The bow gun of the San Francisco Maru at about 50m depth in Truk Lagoon. 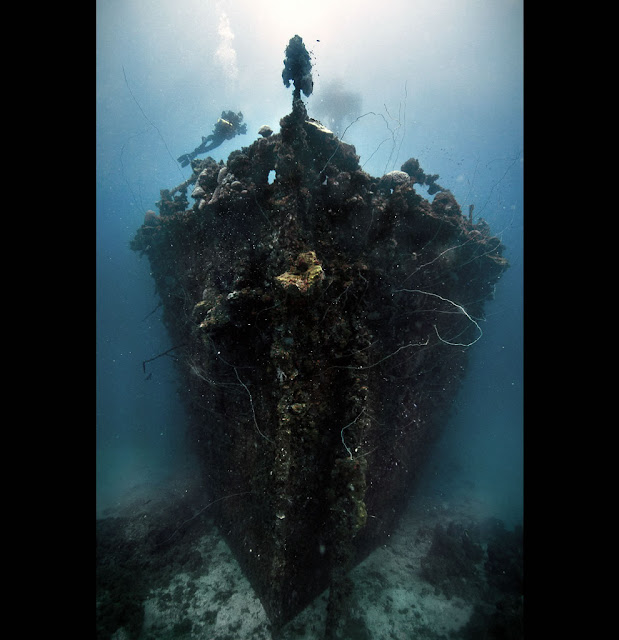 The bow of the Unkai Maru in Truk Lagoon, Micronesia. 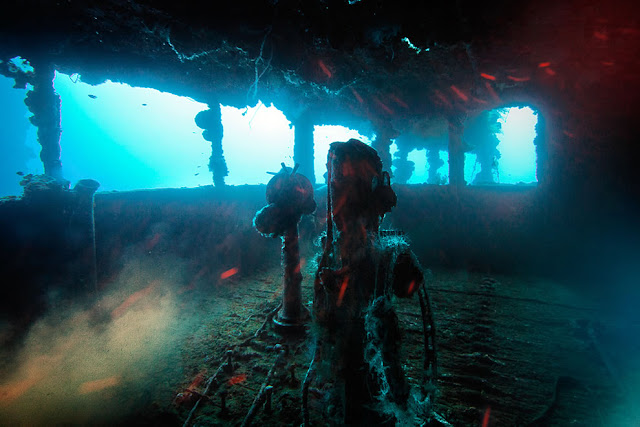 The bridge of the Nippo Maru. 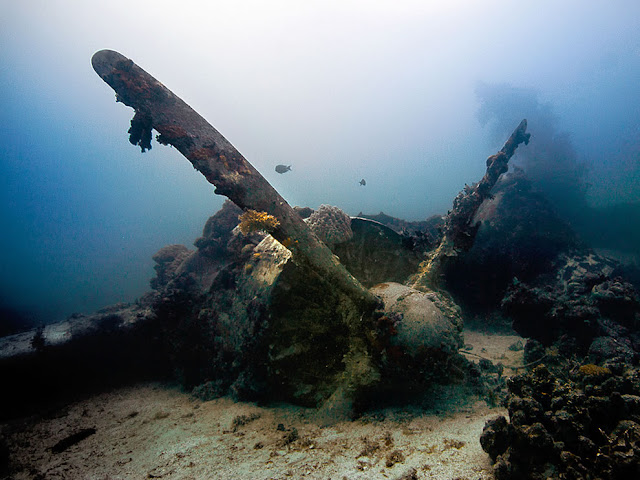 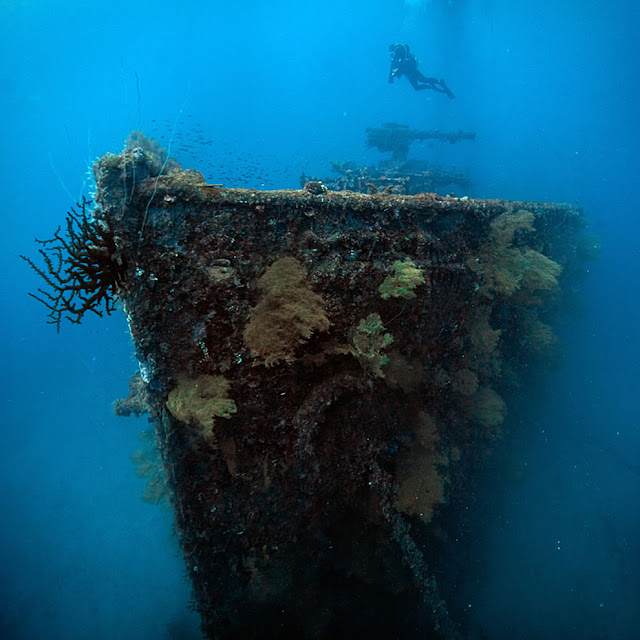 The San Francisco Maru in Truk Lagoon. 65m to the seabed. 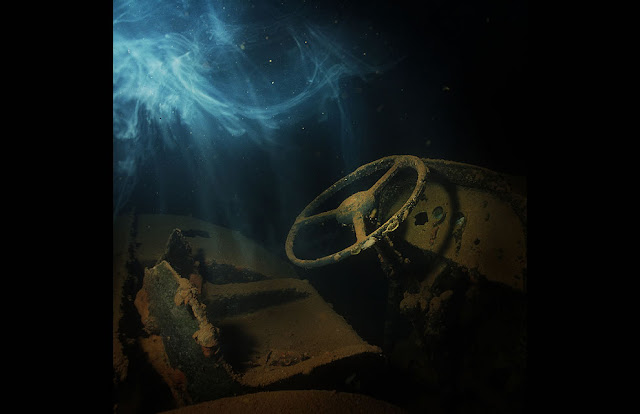 Now for the skeptics: “Tractor & Ghost in Hokai Maru, Truk Lagoon.” Photographer Don Barnett noted, “The ghostly fluid is probably aviation gas that still leaks from hundreds of barrels on the freighter where this was taken.” 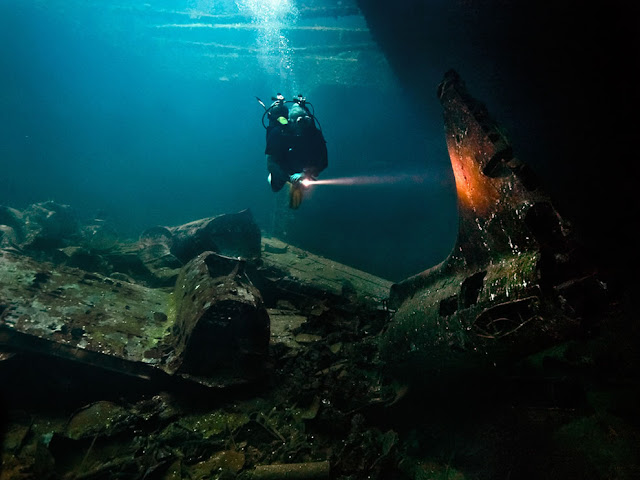