Police in Washington, D.C., are looking into a matter concerning a photograph of two Republican lawmakers with an AR-15 rifle inside one of the House buildings.
Democrats are pushing authorities to arrest the congressmen for holding what turns out to be an inoperable gun.
The AR-15 belongs to Representative Ken Buck (R-CO) and is decoratively painted to look an American flag.

“I have a very patriotic AR-15 hanging in my office. It hangs directly above my Second Amendment flag,” Buck said.
When Congressman Trey Gowdy (R-SC) visited Buck’s office the two posed with the rifle for a photo which Buck tweeted. The photo caused a stir, as it is illegal to have an AR-15 in the District and House rules forbid firearms. 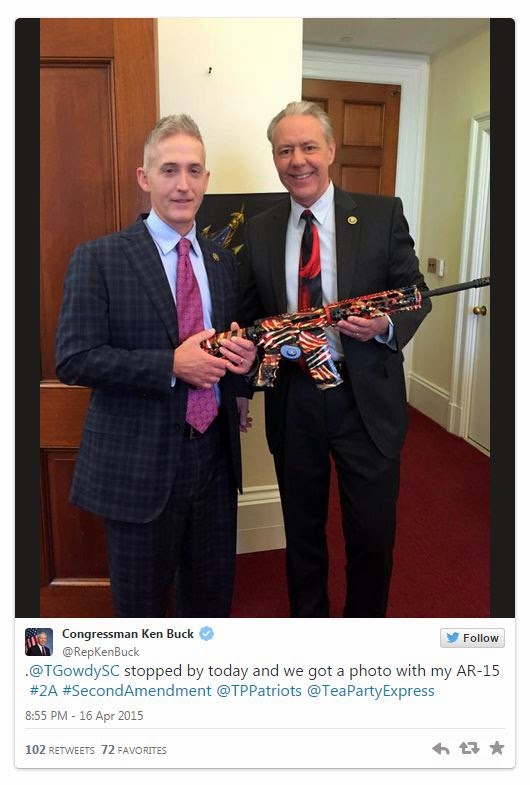 Buck told The Hill that he had obtained permission from Capitol Hill Police to bring the weapon to his office, because the rifle was in fact inoperable.

“While safety protocols call for all guns to be treated as if they are loaded, this one isn’t.
Further, a close inspection of the only public photo of the rifle will show that the bolt carrier assembly is not in the rifle; it is in fact in Colorado.”
Without the bolt assembly the rifle is not functional. The congressman concluded that the gun was truly nothing more than “a beautiful, patriotic paper weight.”
The city’s Attorney General stated that it has referred the matter to the Metropolitan Police Department for further review.
Liberals are raving that the two should be locked up. Because with so many important issues facing the nation, the most important thing liberals can think to do is get the police involved over harmless Twitter pictures.
Labels: News
Newer Post Older Post Home