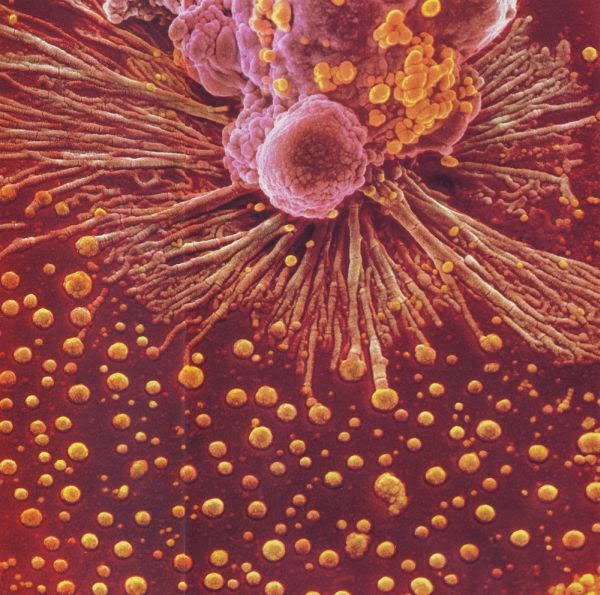 A macrophage (x18000), a human defense cell, seeking to engulf droplets of oil.

T-cell under attack from HIV 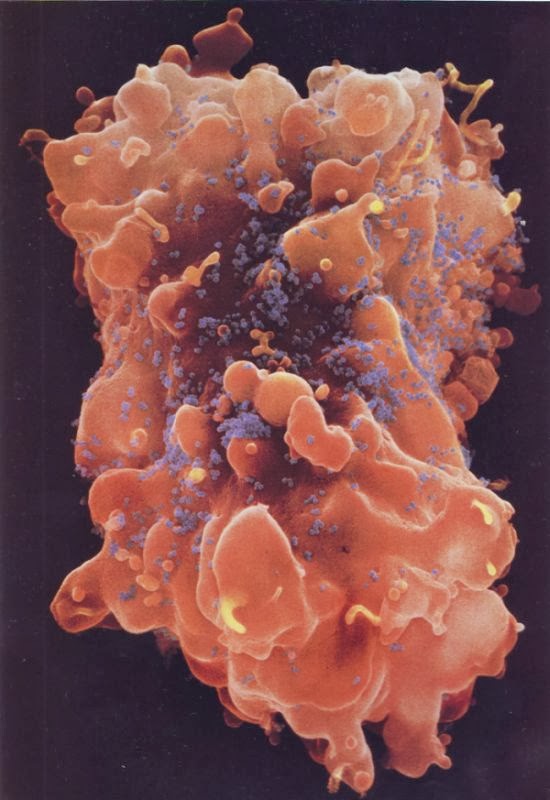 A major component of the immune system, a helper t-cell is under attack by Hiv/ AIDS (blue) 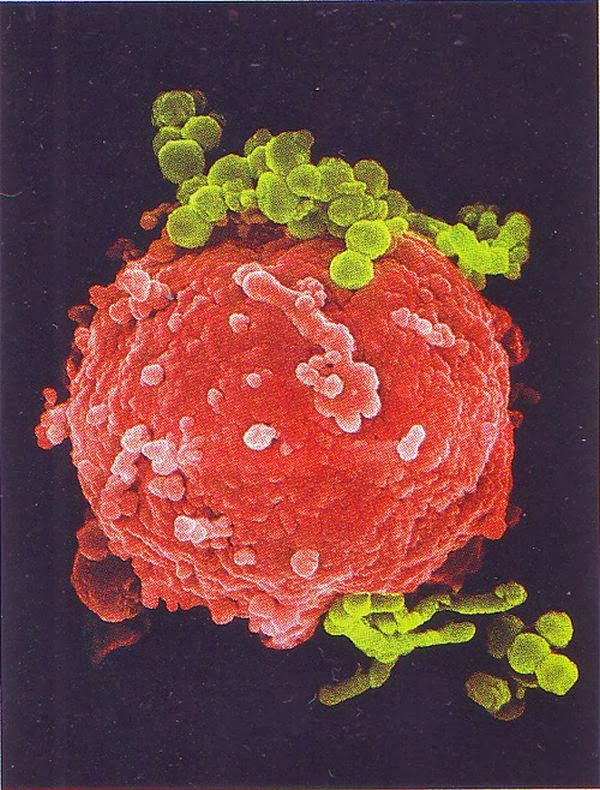 latecomers in immunesystem evolution, B-cells, like this specimen covered with bacteria, produce armies of anti-bodies whose sole purpose is to attack a single kind of pathogen. 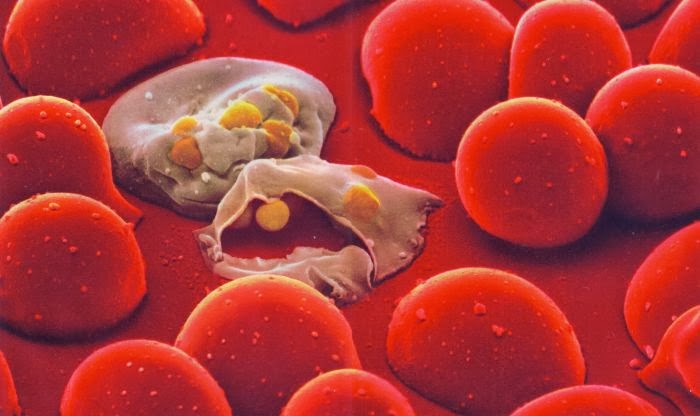 Malaria protozoa have multiplied in two cells in a culture dish of red blood cells. One has burst open releasing the parasites to infect other cells 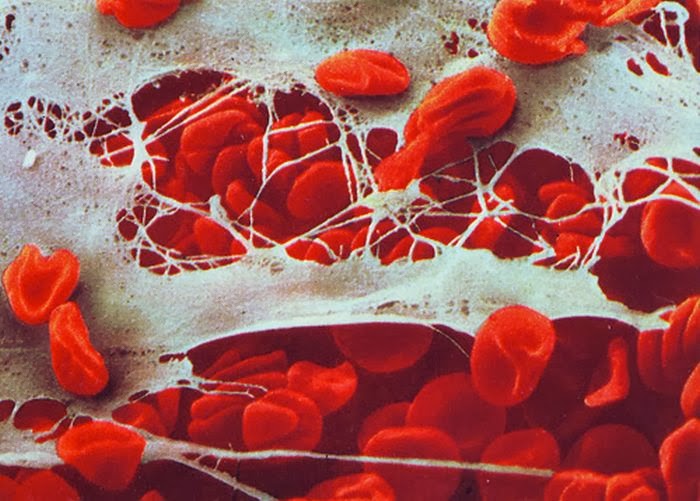 First line of defense agains armies of dangerous microorganisms, skin tissue is able to mend itself rapidly after injury. 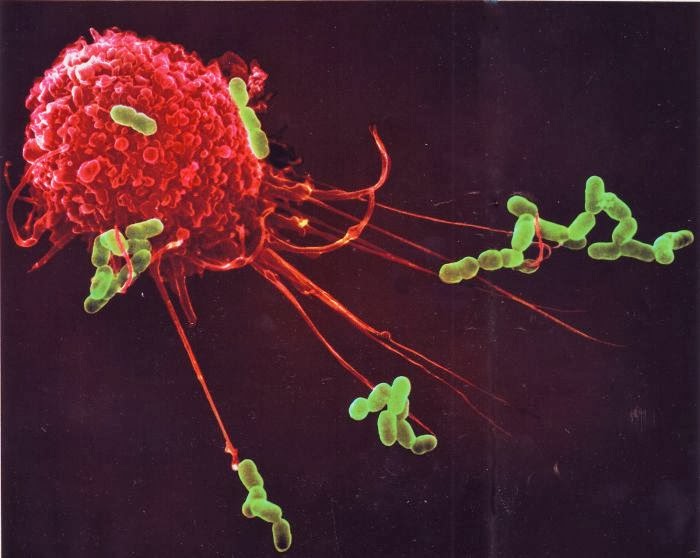 First step in phagocytosis, or "cell eating" a macrophage extends several pseudopods from it's singlecelled form to embrace a number of E-coli bacteria 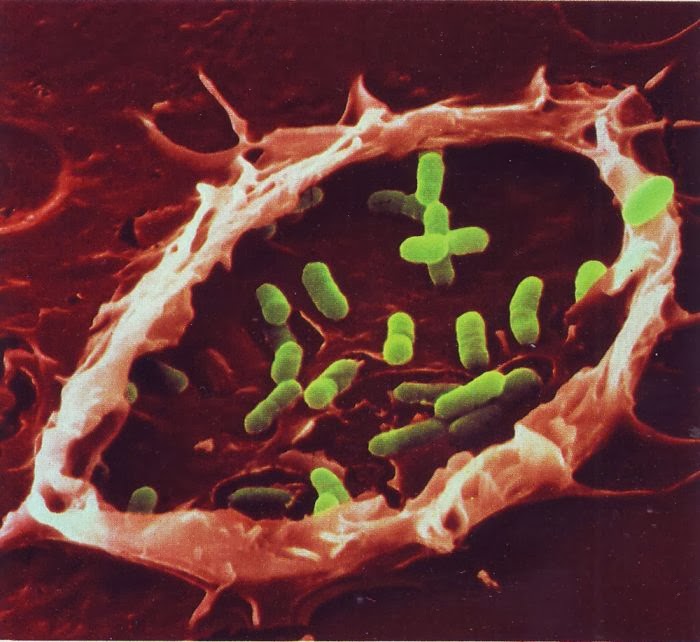 Bacteria trapped within an extension of a macrophage membrane 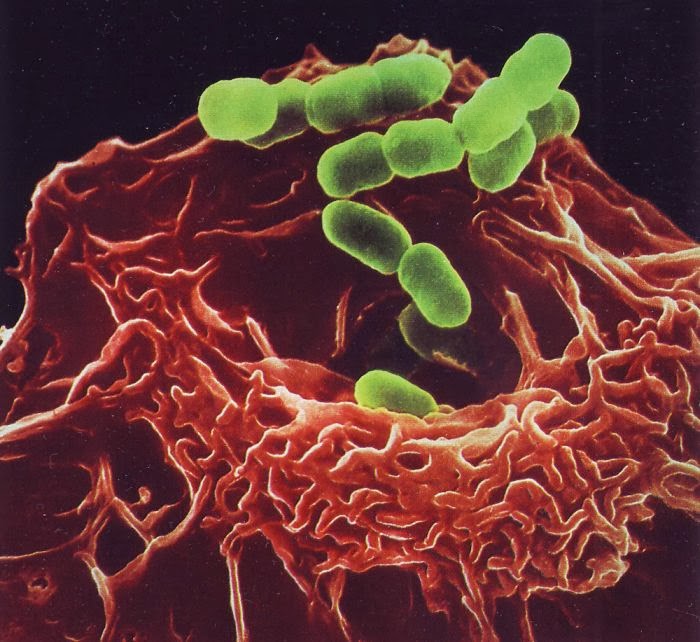 Powerful chemicals inside the macrophage will breakdown and destroy the components of invading cells.

A macrophage reaches out 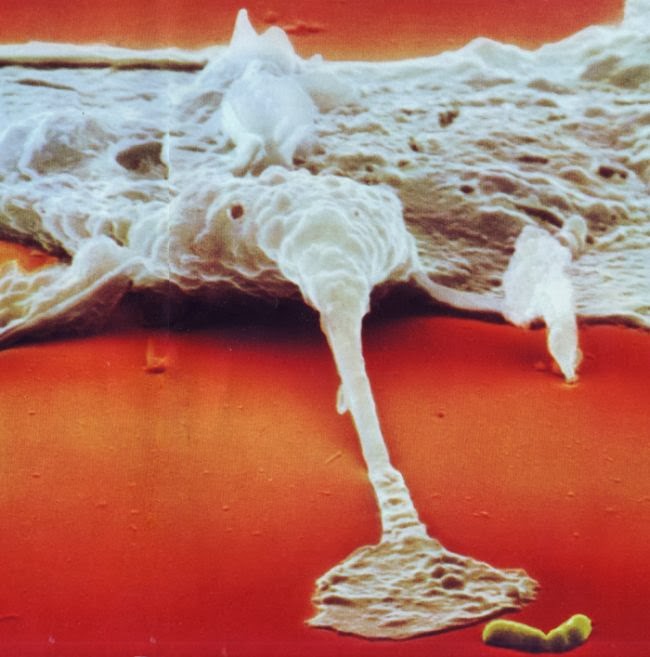 Like a vision from science fiction, a macrophage reaches out to ensnare bacteria with a cellular extension called a pseudopod. 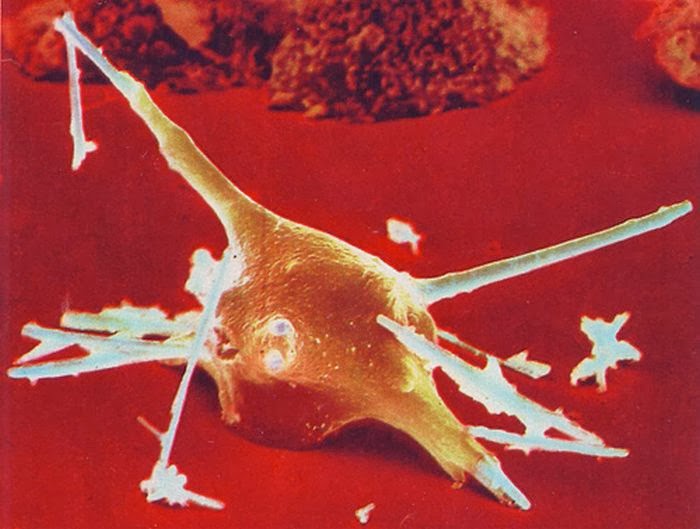 One of mankind's greatest inorganic threats, asbestos fibres are engulfed by a macrophage which will probably die from it's indigestible meal. 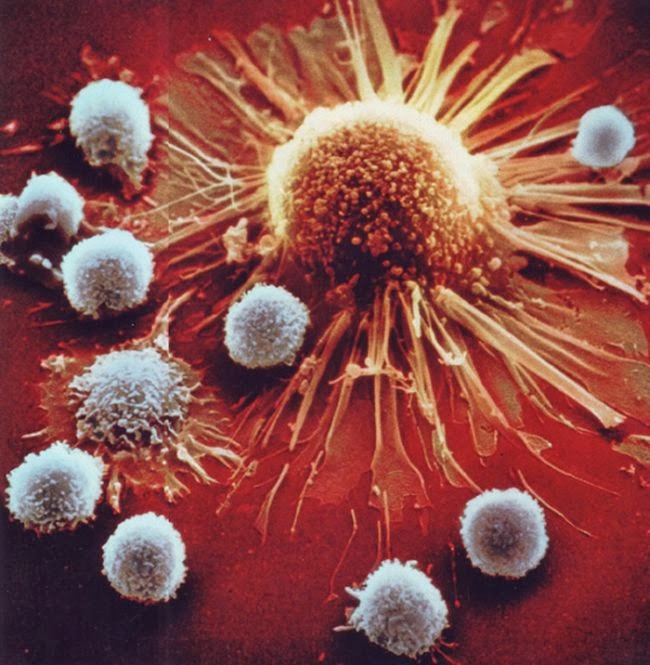 mutiny in the body is a constant occurrence, many believe, as healthy cells somehow escape the mechanisms that regulate cell growth and turn cancerous. Fortunately, antigens on their surfaces sometimes alter slightly, changing from self to non-self. Thus the cells become targets for Killer T-cells, like these surrounding this large cancer cell. 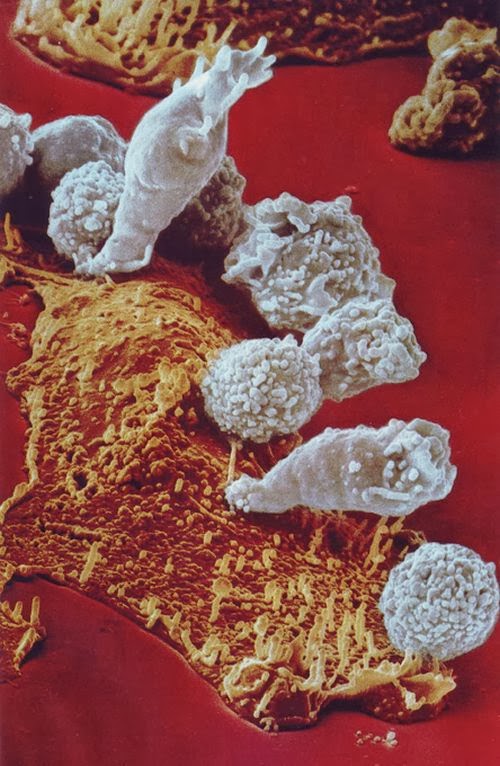 Frozen in action, killer T cells appear remarkably alive as they attack a cancer cell. Several of the normally round T-cells acquire the elongated shape of active fighters as they subject their target to chemical attack, breaking down the cell membrane. 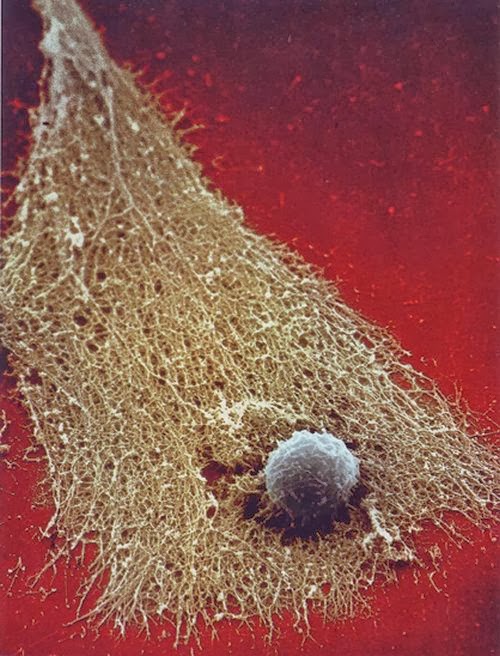 After a cancer cell loses it's cytoplasm, only a fibrous skelleton is left, here surrounding a T-cell. 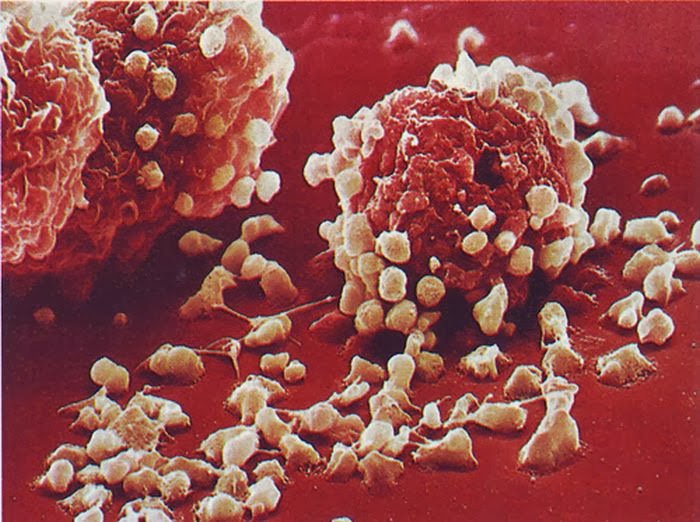 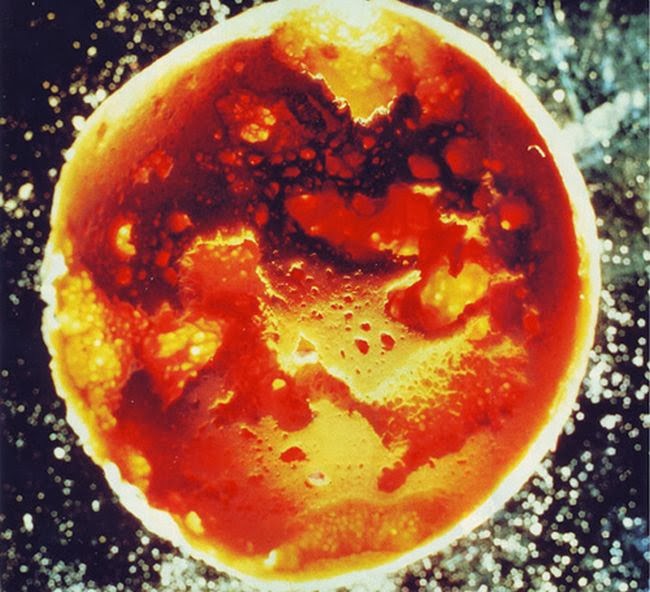 A renegade immune system has ravaged a (surgically removed) femur of a 50 year old women suffering from Rheumatoid Arthritis. Most common of al the autoimmune disorders. 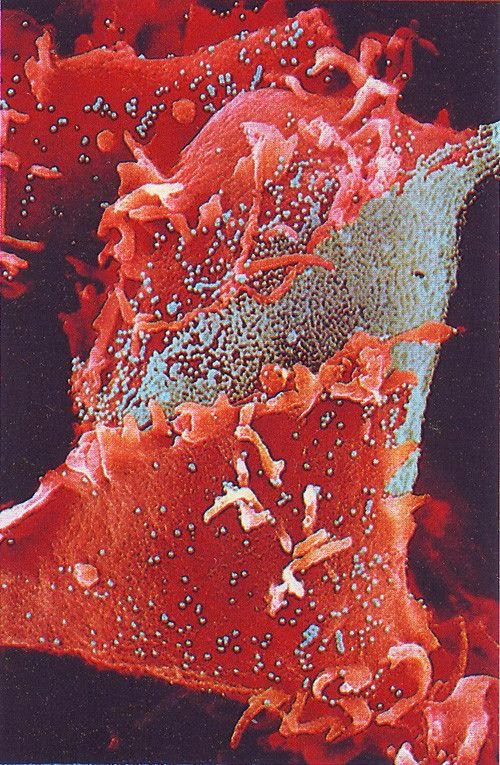