The United States has been operating a secret drone base in Saudi Arabia for the past two years as a launch pad for attacks on terror targets in Yemen, it emerged on Wednesday. 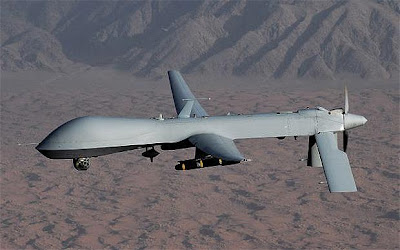 Anwar al-Awlaki was reportedly killed by a Predator drone

The revelation came after a news blackout on reporting the existence of the base was broken by two US newspapers. The blackout had been agreed by American media organisations and the Obama administration bceause of the national security issues involved.

The first pilotless CIA mission flown from the base killed Anwar al-Awlaki, a US-born cleric and senior figure in al-Qaeda in the Arabian Peninsula, and a deputy in September 2011, reports said.

Another Predator drone strike killed Awlaki's 16-year-old son Abdulrahman weeks later, though US officials claimed in the Washington Post that he was not the target of the attack.

There have been at least 64 drone attacks on the unstable Arab state since 2002, though President Barack Obama dramatically escalated their frequency to an estimated one a week at times last year.

The disclosure of the drone airfield will embarrass the Saudi royal family, which still faces anger from powerful conservative clerics for allowing the US to establish military bases after the 1991 Gulf war.
Those bases closed by 2003, but the presence of non-Muslim troops on holy soil was effectively deployed as a casus belli by al-Qaeda leaders.

The Washington Post said several US media organisations knew of the drone base but abided by official requests not to disclose its location because of the risk to counter-terrorism cooperation with Saudi Arabia.

The Post said that when it learned that another news organisation - the New York Times - planned to break the agreement, it decided to publish what it knew.

President Barack Obama's decision to nominate John Brennan as CIA director has brought into focus the quasi-official lethal drone programme, which has killed an estimated 3,000 militants and civilians in Afghanistan, Pakistan and Yemen.

Mr Brennan faces a confirmation hearing in Congress on Thursday that provides critics a rare chance to question the ethics of using drone missiles.

As chief counter-terrorism adviser in the White House, Mr Brennan has been central to drawing up a hit list of "high value" al-Qaeda targets for Mr Obama's approval.

Administration officials have credited the attacks by the unmanned aircraft for wiping out most senior figures in al-Qaeda's original leadership. Critics say many of those targeted are foot soldiers rather than leaders and described the death of the Awlaki father and son as extra-judicial killing.

A leaked US justice department memo cited legal advice on pre-emptive military action provided by Lord Goldsmith, attorney general to Tony Blair, as an effective justification of the drone programme.