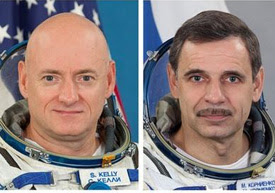 Russian cosmonaut Mikhail Kornienko and NASA astronaut Scott Kelly have been picked to carry out the mission, which will be twice as long as typical six-month trips to ISS.
"It was a tough choice among many excellent candidates, but we have chosen the best and we are absolutely confident about their dedication and abilities," Roscosmos head, Vladimir Popovkin, said.

Korniyenko, 52, has spent a total of 176 days in space as part of Expedition 23/24 crew in 2010. He carried out a spacewalk that lasted almost seven hours.

The two already have a connection since Kelly was a backup crew member on the mission where Kornienko was a flight engineer.

"The one-year increment will expand the bounds of how we live and work in space and will increase our knowledge regarding the effects of microgravity on humans as we prepare for future missions beyond low-Earth orbit," said NASA's William Gerstenmaier.

Scientists and researchers will also analyze the impact extended time in space has on the human body including bone density, muscle mass, and vision, officials with Roscosmos said.

Both NASA and Roscosmos have announced plans for future long term space exploration projects including manned missions to near-Earth asteroids and Mars.

Russian cosmonaut Valery Polyakov spent nearly 438 consecutive days in space during an endurance mission aboard the Mir Space Station. The mission began in January 1994 and ended in March 1995.