US to move the majority of its naval fleet to Asia

The United States will move the majority of its war ships to the Pacific Ocean as part of a strategy of boosting links with its Asian allies, Leon Panetta, the American defence secretary, has announced. 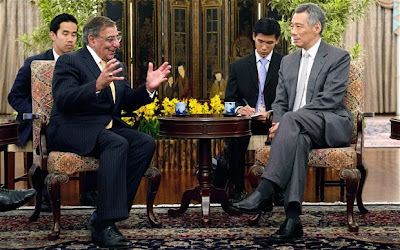 U.S. Secretary of Defense Leon Panetta speaks with Singapore's Prime Minister Lee Hsien Loong during a meeting at the Istana, the official residence of the President of Singapore

Speaking in Singapore, Mr Panetta said the shift from the Atlantic to the Pacific would take place by 2020, at the same time as military cooperation with nations including Vietnam and the Philippines was enhanced.

At present, around half of all US war ships are in the Atlantic, and the shift is being seen as part of what President Barack Obama has described as a “pivot” towards Asia in American foreign policy.

Some Asian critics had questioned whether the White House would find the money to make good on its commitments to the region.

But Mr Panetta told an audience of military chiefs and defence officials: “By 2020 the Navy will reposture its forces from today's roughly 50-50 split from the Pacific and Atlantic to a 60-40 split in those oceans.

“We will play an essential role in promoting strong partnerships that strengthen the capabilities of the Pacific nations to defend and secure themselves.”

Mr Panetta was speaking during an eight-day trip to Asia, which will also take him to India and Vietnam.

Asked if increased involvement in the region would stoke tensions between the US and China, he said: “I reject that view entirely. Our effort to renew and intensify our involvement in Asia is fully compatible with the development and growth of China.

“Indeed, increased US involvement in this region will benefit China as it advances our shared security and prosperity for the future.”

The US was “clear eyed” about its China, Mr Panetta said, adding: “We’re not naive about the relationship, and neither is China. But we also both understand that there really is no other alternative but for both of us to engage.”

Addressing the annual Shangri-La Dialogue conference, the defence secretary said enhanced military cooperation had to be accompanied by a “rules-based order” which allowed “open and free commerce, and open access by all to their shared domains of sea and air”.

He called for a peaceful resolution of a territorial dispute over the South China Sea, one of the busiest shipping areas in the world with lucrative natural gas and oil along with valuable fishing rights.

Beijing insists it should control most of the Sea despite opposing claims from Taiwan, Vietnam, Malaysia, Singapore, Brunei and the Philippines.

As part of the focus on Asia, the US Navy will base four new lightly-armed ships in the Strait of Malacca, which links the Indian and Pacific oceans.

The defence secretary also gave some clues as to how the US would allocate its resources at a time when finances are tight and Asian nations are increasing defence spending at a higher rate than the West.

In contrast, the US is due to shave nearly half a trillion dollars from its defence budget over the next 10 years.

He set out how America would invest in the latest technologies, including “new aerial refuelling tankers, a new bomber, an advanced maritime patrol and anti-submarine warfare aircraft.”

“It will take years for these concepts, and many of the investments we are making, to be fully realised,” Mr Panetta said.

“But make no mistake, in a steady, deliberate and sustainable way, the United States military is rebalancing and brings enhanced capabilities to this vital region.”

Speaking at the same conference, John McCain, the former Republican presidential candidates, said it was inevitable that US budget cuts would affect the new Asia strategy.

He said: “At some point, and I think we are at that point, we will not be able to carry out the commitments.”
Labels: News
Newer Post Older Post Home