The first official British European Space Agency astronaut Tim Peake is being trained for a mission to land on an asteroid, it can be revealed. 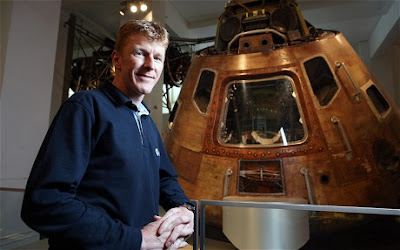 Next month Tim will begin a training programme that will teach him how to operate vehicles, conduct spacewalks and gather samples on the surface of an asteroid

It is a space mission straight from the Hollywood film Armageddon.

A team of astronauts are being trained to land on an asteroid to explore its surface, search for minerals and even learn the skills they may need to destroy it should one pose a threat to the Earth.

Nasa, the US space agency, is planning to send humans far further than they have ever been before to by making contact with an asteroid up to three million miles away by the end of the next decade.

It would take astronauts far beyond the current limit of human endeavour – the Moon, which is 239,000 miles from Earth.

Travelling at around 50,000 miles per hour around the Sun with almost non-existent gravity due to their small size, landing safely on these space rocks will present a significant challenge.

A team of astronauts, however, have already started preparing for just such a mission. Among them is Major Tim Peake, a former British Army helicopter test pilot who is now the first official British astronaut with the European Space Agency.

Next month they will begin a training programme that will teach them how to operate vehicles, conduct spacewalks and gather samples on the surface of an asteroid.

While the primary goal of a mission to an asteroid will be scientific to learn more about their hostile environments, the skills needed to work on their surface could also prove invaluable should scientists discover one on a collision course with Earth.

Nasa is currently monitoring more than 400 objects with potential to hit the Earth, although most are considered to be low risk.

Major Peake said: "With the technology we have available and are developing today, an asteroid mission of up to a year is definitely achievable.

"Asteroids are interesting on a number of different levels. Nasa is focused on the science you can achieve as asteroids are essentially a historical record of billions of years of our universe where we can take samples from.

"These objects are also coming extremely close to Earth all the time, but we rarely hear about it. In the last year we had an asteroid come within Earth's geostationary orbit, which is closer than some satellites.

"With enough warning we would probably send a robotic mission to deflect an asteroid, but if something is spotted late and is big enough we might come into Armageddon type scenarios where we may have to look at manned missions to deflect it.

"That is when the skills we are learning about how to work on an asteroid could be useful."

Officials at Nasa are due to reveal details of a manned mission to an asteroid at a conference later this month in Japan.

In a report to be presented to the Japan Geoscience Union Meeting, they will say that it hopes to launch an unmanned spacecraft that will use a robotic arm to collect samples from an asteroid by 2016 before sending a manned mission by the late 2020s.

A manned mission will aim to rendezvous with an asteroid up to three million miles from the Earth, taking around a year to make the entire round trip. The astronauts could stay on the asteroid for up to 30 days.

The officials will say that such missions to asteroids could help test technology for future human missions to other planets including Mars.

Nasa hopes that such missions will provide new scientific information about the early universe while also providing valuable information for ways of defending Earth from collisions with asteroids.

Earlier this year scientists identified an asteroid more than 460 feet wide that could come close enough to Earth to collide with our planet in 2040.

New findings by Nasa's Dawn spacecraft released last week have also revealed that around six per cent of the meteorites to have hit the Earth broke off a large 120 mile wide asteroid called Vesta, which was found to be rich in metals and minerals including iron and magnesium.

In the Hollywood movie Armageddon, a crew of astronauts and oil rig drillers are sent into space to land on a massive asteroid that is on a collision course with the Earth, where they drill beneath the surface to plant nuclear warheads in the hope of destroying it.

Major Peake and five other astronauts will next month be sent to an underwater base off the coast of Florida where they will spend 12 days living 65 feet beneath the surface of the Atlantic Ocean to simulate working in the difficult low gravity environment of an asteroid.

During the underwater training they will also test equipment that is being developed for such a mission.

Although the training does not guarantee Major Peake a place on a future mission to an asteroid, it means he could be on a shortlist of potential candidates if one is launched within the timescales being proposed by Nasa.

The astronauts have already received extensive briefings about working on asteroids and have begun training on land to prepare for the mission beneath the sea.

They will share a 43 feet long by 20 feet wide underwater capsule where they will live, eat and sleep as part of the Nasa Extreme Environment Mission Operation, or NEEMO.

Major Peake said: "Asteroids present some really interesting challenges as even a big asteroid is going to be a low gravity environment, so we have to look at how we would anchor a vehicle and ourselves to that surface.

"We are looking at all sorts of different tools and techniques for how you would explore an asteroid, collect scientific samples and return them to Earth.

"NEEMO is as close to the real thing as we can manage on Earth. We are in a confined space and living quarters are very tight.

"We will need at least 12 hours of decompression before we can resurface safely so we are sort of trapped down there, and that makes it much more realistic."

While underwater, they will conduct a hectic schedule of exercises where they will move around the ocean floor in vehicles much like they would above the surface of an asteroid.

They will also perform "spacewalks" on the sea floor and test equipment for tethering a spacecraft to an asteroid, collecting rock samples and drilling into the rock.

Major Peake added: "I would love to go on an asteroid mission. There is a possibility that if things continue at a good pace an asteroid mission could happen within the 2020s and that is within the operational time frame of myself and the other ESA astronauts."
Labels: News
Newer Post Older Post Home