President Barack Obama is being hosted at George Clooney’s house tonight for a record-breaking fundraiser expected to bring in $15 million for his re-election campaign. 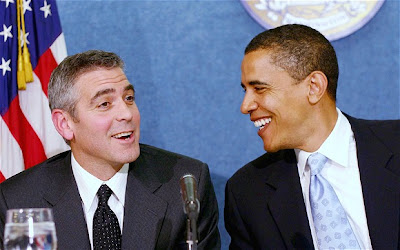 George Clooney and Barack Obama campaign together over the Darfur crisis in 2006, since when the actor has offered his support to the president

The extravaganza is being attended by stars including Barbra Streisand, Robert Downey Jr and Tobey Maguire, and executives from the movie, music, television, legal and healthcare industries.

It marks a resurgence of Hollywood support for Mr Obama after some influential figures had expressed disappointment over his first term handling of issues including Afghanistan, Guantanamo Bay, and the White House’s failure to support the entertainment industry in its battle against online piracy.

However, Mr Obama’s announcement on Wednesday that he supports gay marriage has led to immediate increased support in Hollywood and should mean more donations.

The Clooney-hosted event was originally supposed to take place at the new $35 million home of Jeffrey Katzenberg, head of the DreamWorks Animation studio, but the mansion is yet to be completed, and Clooney stepped in.

A total of 150 guests have paid $40,000 each for dinner, bringing in $6 million. The other $9 million was raised by an online raffle for a pair of tickets. Entry to the raffle cost as minimum of $3. Tens of thousands of Americans entered and donated an average of $23 each.

The winners were being flown to Los Angeles to sit with the president and Clooney for a meal prepared by celebrity chef Wolfgang Puck at the actor’s home in the Studio City area.

Mr Katzenberg, one of the biggest donors to Mr Obama’s re-election campaign, said: "It's a stunning turnout of support, and what's really interesting to me is that almost two thirds of the money is coming from grass-roots support, from the 99 per cent.”

Mr Obama has already spent months raising money for his re-election campaign in an effort to have a huge war chest to take on the presumed Republican presidential nominee, Mitt Romney, at the polls on Nov 6.
Labels: News
Newer Post Older Post Home