More than 30 people were killed in a wave of co-ordinated bombings and shootings across Iraq today, following a now regular pattern of Al-Qaeda attacks. 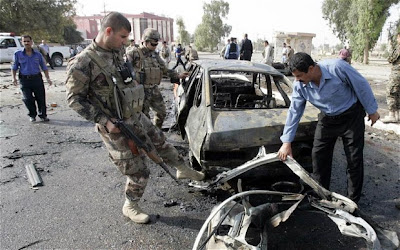 At least 17 of the dead were in Baghdad, where a car bomb in Haifa Street in the city centre hit a convoy carrying the health minister, Hamed Amin, wounding four of his bodyguards and killing two civilians.

The others killed in the Iraqi capital were hit by car bombs across the city centre and in the suburbs of Al-Amil and Khadimiyah. The targets of the attacks seemed mostly to be Shia, also a social club for members of the Turkmen minority was also struck, killing two people.

Outside of Baghdad, there were attacks in and near the cities of Kirkuk in the north, one of which killed six people, Ramadi in the west, and in Baquba, to the north of Baghdad. All have been regular centres of Al-Qaeda activity.

Among the individuals attacked were an army brigadier-general, who survived, and a first lieutenant, who was killed. There was also a mortar attack on the home town of Saddam Hussein, Tikrit, though there were no deaths reported.

Five members of the Sahwa, or Awakening Council, a Sunni militia formed by the American forces before they left the country to combat Al-Qaeda in their own areas, were killed in a bomb attack on a checkpoint in Samarra. By late morning the death toll had reached 35, with around 80 people injured.

The last major concerted attack of this sort took place on March 20, just before an Arab League summit was due to be held in Baghdad amid tight security. However, diplomats in Iraq say there is now a regular pattern to such bursts of violence, which occur regularly every four to six weeks - apparently, the amount of time it takes for Al-Qaeda cells still operating in the country to build up their armoury of explosives.

The fact that the same places are hit - Baghdad and cities in mainly Sunni areas in the north - reflects the long-term weakening of the Iraqi branch of Al-Qaeda's fighting ability, though they are still occasionally able to mount "spectaculars" in the majority-Shia south.

The next major date in the Iraqi calendar is the second stage of the recent round of negotiations on the Iranian nuclear programme, when senior western and Iranian officials are due to meet in Baghdad on May 23 - five weeks from now.
Labels: News
Newer Post Older Post Home